A is for Awesome Alfie

Who better to jump the first A-Z hurdle
than
Awesome Alfie. 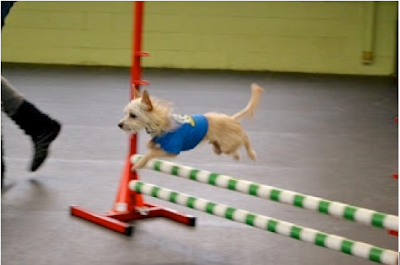 Al is a mixed breed dog rescued from a puppy mill in the States.

Our best guess is that he is a Chinese Crested/Border Terrier mix; he weighs in at a whopping six pounds. Al was rescued with his brother, Fogel, and spent six months at the Dhana Metta Rescue Society.

The folks at Dhana Metta Rescue Society were having a tough time finding a home for little Al because he looked like a malnourished waif that could barely stand. Those that thought of adopting him couldn't see beyond his exterior appearance thereby overlooking his incredible potential.

My daughter, Courtney, stepped up to the plate and took in this little sweetie giving him lots of love, to the point where he now feels safe and well cared for.

Alfie has filled out, as much as a little waif can, and just loves to run...and I mean run! This little guy outruns the big dogs when they head over to a neighbourhood park.

Courtney takes Al to Agility Classes where he shines! In fact, his recent class is full of girl doggies. As the only boy he loves showing off for the girls; they in turn just adore him as they vie for his attention.

However, the girl doggie that remains his favourite is Lucky - they love hanging out together. 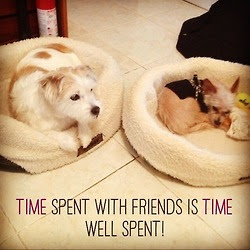 You can find Alfie hanging out at Daily Bark, his really cool website.

Alfie and his Ma, Miss Courtney, are taking part in the A-Z Challenge with some really awesome posts - so drop by and give Al a big High Five!  (he loves giving the High Five for treats too)

What do you think about rescuing pets?
Is it something you would do?

Cheers, Jenny
Email ThisBlogThis!Share to TwitterShare to FacebookShare to Pinterest
Posted by Pearson Report at 12:00 am