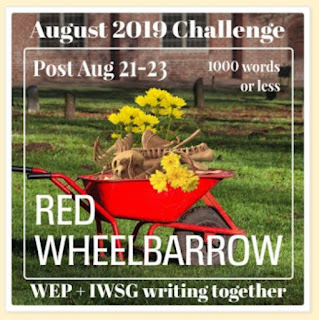 When she bought me I wondered if it was purely because the price tag was greatly reduced.


I had been left out in the rain, in the yard of the co-op, for what seemed like weeks. It had only been a few days, over a holiday weekend, but the damage was done.


Howie, the boss’s son was at fault, but hey, he was just a kid, that’s what his mom always said coming to his defence; and the boss always shrugged as he shook his head in disappointment.


“John,” she said to the man standing off to one side trying to avoid me as I was jostled from side to side, “the tire looks flat already. Do you think it has a hole?”


Well, I was relieved to know that all that was standing between me and a new home was some air. If I could breathe I think I would have taken in a long breath and slowly exhaled. But all I could do was stand there now that she had let go of me and watch as she slowly made her way around me eyeing the visible rust.


“The rust won’t be a problem, it’ll get rustier with what we’re doing,” she said to the fellow that still seemed weary of getting in my way. If I had feelings I think I might not have liked him very much, he seemed rather indifferent – not sure if it was toward me, or toward her. And, feelings or not, I liked her.


Once in the back of their truck I bounced about as we made our way somewhere; somewhere other than where Howie would be and that could only be good.


Their yard needed work, and I could see right away what my job would be after my tire got air – I would be hauling loads of old bricks from what was once a chimney to what looked like a garden.


The bricks chipped away at my beautiful red finish leaving even more bare metal exposed to the elements. Yes, I was left outside; now that I belonged to someone I knew that would be my fate.


Finally, the last brick was placed around the newly planted flowerbed and I was given my first long cold rinse. Ah, how I loved feeling clean. But what did I look like, I wondered, how badly had I been damaged? I had felt the dents, the scratches, and even the harsh bangs as I was put through my paces. That was my job, so who was I to complain. But I did wonder, why paint me and make me look so good only to take it all away?


The sun beat down on me and I dried up to a point where the remaining paint started to flake. Next came a rough brushing followed by suction. Not sure what was going on, but I loved all the attention. I was being cared for and I liked that feeling.


Days passed while I was left in the blazing sun.


Alas, a day came when I was wheeled into a shed, it was dark, and if I dare say, a little dank and musty. I really wanted to be outside – oh the irony; you see, I had gotten used to the weather and its company.


Something tickled me, all over, it was cool, slightly sticky. I felt fresh, new, as if I was young again, right out of the factory. Wonderful feeling indeed.


A few more days passed before I was wheeled outside and placed right in the centre of the flowerbed. I was covered in a cloth, heavy rocks were added, next came dirt. I wondered what was going on – where would I be taking this load?


The cloth was trimmed, flowers were added and positioned. How strange that such care was taken with this load. I was confused.


Suddenly, I heard her exclaim, “John, it looks amazing, that wheelbarrow worked hard helping us make this garden look so beautiful. It’s the perfect centrepiece.”


I decided to participate in this writing challenge - I got the idea from DG Hudson, a blogger I follow - she posted for the last one and I really enjoyed reading her piece The Jewel Box of Mystery.

Thank you for stopping by, I hope you enjoyed The Centrepiece.

I have posted a short (2:49) video on how to easily correct this issue
HERE

Or, go to Settings, click on Basics - change HTTPS Redirect from No to Yes.
Your blog will be secure after that.

All websites need to use encryption to ensure secure transfer of information –
sensitive or not.