The hands extended may very well be your own. 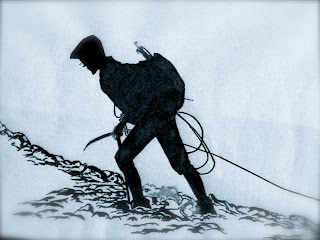 The quiet of the night was punctuated by her heart beating in unison with the wall clock down the hall. Save these two sounds silence closed tightly around her and cloaked her in peace and contentment.

The momentary lull in the turbulence she had been experiencing these past months gave way to thoughts of a time long passed; of simpler days when only her needs where the issue of the day.

The steady pull of the orbit she now found herself in was reassuring as it required no effort on her part to stay the course - other than breathing. At times she found herself testing the gods; how long could she hold her breath before the ticking stopped and the wall clock stood still. She smiled.

It would take much more than a strong orbital pull to break her determination; she would complete this intergalactic journey with or without the help of the gods. In fact, she was finding them a hinderance and at times cast them a stern look from behind darkened glasses - they need not see the tears - but she knew they could feel the burn and the anger and the rage.

The storm had abated, for now; she would relish in the calm knowing it was just a matter of time before all hell broke loose with its demons in full pursuit once again.

She had outrun hell’s wrath before; this evening, tightly wrapped and cloaked in a modicum of peace and contentment, she would let the gentle ticking lull her into a deep and restful sleep.


“She who helps herself is in good hands.”
Jenny Pearson

Whose hands are you in?

Email ThisBlogThis!Share to TwitterShare to FacebookShare to Pinterest
Posted by Pearson Report at 2:04 am 27 comments: