What version of the “bible” do you have? This is mine...

I hauled it off the top shelf - I needed a step stool to reach it; had to dust it off and oil the spine - it’s been a while since I cracked it open.

Yesterday, I had a moment.

You know the moment I’m speaking of - we all get them. It’s the one where you suddenly realize you’re missing something and want to reclaim it, or at least see if it’s still alive.

You stop what you’re doing and go hunting, soul searching as it were; you find what you’re looking for because it wasn’t hard to find once you stopped doing the chicken dance and put your mind in neutral for a few minutes. It’s amazing what appears when the dust settles and the din fades.

As of September 19th I will be revisiting a passion from my past.

It’s time to sharpen my HB pencils, dulled from years of neglect; soak my brushes, hardened to resemble little clay hedgehogs; and scrape the layers of denial and regret off the blank pages of my sketch book; these things have been patiently waiting for this day to arrive.

I am taking a Creative Drawing class...and I am stoked!

The class is eleven weeks in duration, two and a half hours each class, just enough time for me to make a good mess and laugh as I watch my world unravel!

Are you asking yourself, "How does she do it - writing, wallet making and now art classes?"

Well, they are all related and the art will be helpful for my "wallet sketching" which is, how should I say, in need of help! And, I think it's a great release for some of my pent up energy...it's this or going to the gun club and shooting up some innocent paper targets! I think this art class might be a better use of the paper, right?

I will keep you posted as to my progress! (aka natural disasters - hahaha)
Ahh...I can hardly wait!

And you…
Have you had “a moment” you want to share? I’d love to hear all about it!

Jenny
Email ThisBlogThis!Share to TwitterShare to FacebookShare to Pinterest
Posted by Pearson Report at 7:08 pm 28 comments:

Vancouver to Richmond - by bike no less! 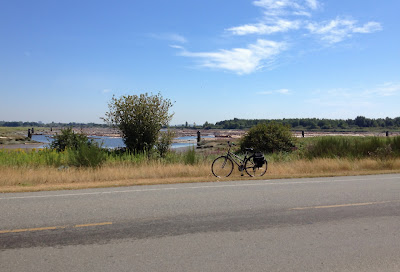 Vancouver has made a concerted effort to put bikes on the map (the highly coveted Bike Vancouver map) as an alternate form of transportation to which end we now have a truly magnificent and highly functional biking infrastructure. (until you get in your car...then it’s a different ballpark)

Although it rains a lot here we do have a few moments of stellar weather and Friday, the 17th, was a beauty.

You can bike most of the year if you don’t mind drizzle which accompanies the overcast skies which make up three-quarters of our weather. All in all, perfect biking weather!!

What you will see when cycling around Vancouver, if you’re not in racing mode with your head tucked between your handlebars and knees, is quite simply worth the energy output.

I left my house around 10:30 am with two water bottles, a protein shake and my sun block all nicely housed in one of my panniers, along with two face clothes (one dry, one wet) and my trusty Bike Vancouver map (small and compact).

Off I went not quite sure what was on the agenda, and so, there I was at the crossroad of 37th and Ontario...with a quick glance left, then right, I turned left and headed south to the border. (okay, not quite that ambitious but the thought of fleeing the scene always crosses my mind)

Here...I want to give a shout out to a helpful cyclist who was kind and gracious in giving up some time to answer a few questions and help me adjust my bike seat for maximum pedalling efficiency. (thanks, Len!).

Red is my route to Iona Beach, in Richmond.
Green is my return ride - note the green dashes, that’s when I was on the SkyTrain.
Brown “X’s” are spots where I took these photos. 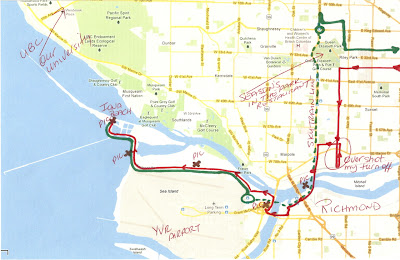 After riding downhill, for what should have been an easy twenty-six blocks, I found I had missed my turn off (at 63rd) and was in no man’s land (aka an industrial area) scratching my helmeted head in disbelieve...I did, after all, have a map. (note to self: must occasionally look at map)

So, after a wee bit of backtracking, pretending it’s what I had intended to do, (didn’t want me and myself thinking I had goofed) I was back on the “right” track.

Fast forward to a lovely ride over the North Arm Fraser River and voila there I was in Richmond - WOW! Too cool.
These two pictures are looking west, taken midway across the SkyTrain bridge. Check out all that industrial land waiting to be occupied.

If you look to the left of centre, in this pic, you will see the tower at Vancouver International Airport...that's close to where I was heading.

Looking back at the SkyTrain Bridge; to the right is the track for the train and the bike/walk path is set below, when a train goes by it is rather interesting having it right above you - let's just hope it doesn't fall off its tracks! In between those support pillars (in the middle) is where I stopped to take the pics above. 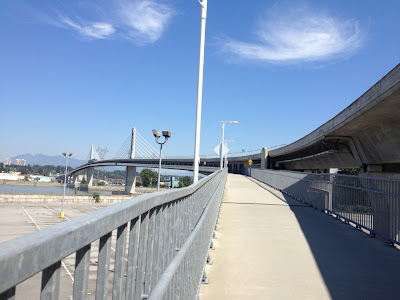 Once off the bridge I headed over another bridge - this one is called Sea Island Bridge. I stopped and took this picture, once passed the trees I veered right.

Looking back to Sea Island Bridge there are those trees I passed. I did a little round about and was facing east for a few minutes. This area is just to the south of the flight path of incoming planes. It was a rush watching them overhead; very close!

I kept to the right of the airport (the north side) and chuckled at the barbed wire fence on my left and wide open fields, with a few horses, thrown haphazardly around, to my right. I caught one enjoying lunch. 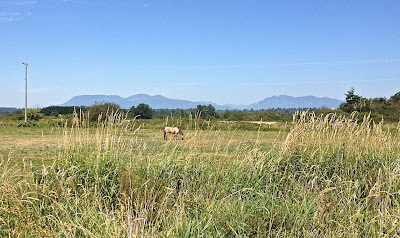 This picture (or three stitched) was taken just before I rounded my final bend. You see those trees, in the distance, well, that's where Iona Beach is, and that is where my adventure ended.

My return trip required a little “cheating” as I knew the uphill ride would be brutal given the blazing sun and its intense heat. (how convenient to have weather to blame) 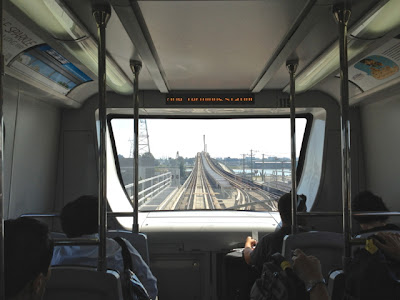 So I hopped the SkyTrain (circled in green) and enjoyed a little reprieve from the heat and my bike seat. I got off at the King Edward Station (aka 25th Ave - also circled in green) and continued the last leg of my epic cycling adventure after a quick stop at 19th to purchase some protein powder.

I had fun on Friday’s outing and while I did take the next day off I was right back at it trying out new routes to my office. (I’m a fan of the easy routes but can't seem to get away from all the hills)

As a week and a bit has now passed I have piled on more miles as I try a variety of bike routes in and around this lovely city...suffice it to say, it’s not a bad way to stay in shape and seems to have some purpose by getting me from A to B in the process. (beats a stationary bike at the gym any day)

Do you cycle? Has your city been pushing a biking initiative? If so, what do you think about it?

Also, do you wear a helmet when biking? (I do)

Email ThisBlogThis!Share to TwitterShare to FacebookShare to Pinterest
Posted by Pearson Report at 7:55 pm 27 comments: