N is for Neonatal Nightmare

Today is a special day, for me...this is the day I became a mother...24 years ago.
So that would mean it’s my daughter’s birthday.
HAPPY BIRTHDAY, COURTNEY
I HOPE YOU HAVE A TOTALLY AWESOME DAY!
I LOVE YOU

I made a little something for you, my sweetie-pie...a little Blogging Award. 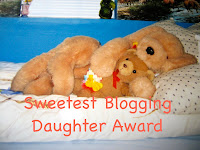 N is for Neonatal Nightmare.
To those of you outside the ‘circle of trust’ you’re probably wondering about the title and asking, “How could her ‘precious’ little bundle of joy be a nightmare in the neonatal stage of life?”
Since you are of a curious nature I will oblige you with the gory details.
Turn back the clock to 1986…
Mr. P wanted a child (possible one of those heir apparent ones) and as the ever accommodating ‘little missus’ I looked at him and said, “Leave it with me dear” - as if this was a one woman show.
Oops, I almost forgot...it was a one woman show!
I needed time to mull over what the astrology books advised with respect to what I, a Pisces, needed my future off-spring to be, and when exactly the best time to conceive was so I could assure myself the success I needed. (and deserved)
I would need an Aries or Taurus child in order to bring out the ‘best’ (not beast) in me and allow the fruit of my loins to make it into adulthood with the least amount of psychological drama! (there are animals out there that eat their young you know)
Now, I know this will be hard to believe, but as the gods do favour me, it was just natural that I found myself ‘with child’ on the exact date specified in my calculations.
Fast forward to the last six weeks.
The reason for the fast forward, is because it was the most uneventful and easy pregnancy know to mankind (or womankind in this case). It’s true - no morning sickness, no nausea, no nothing...dull and uneventful!
Until...those last six weeks.
All hell broke loose as I was diagnosed with this condition called ‘eclampsia’ - now it’s no ordinary simple ‘toxemia’ - no, I get some ‘outer space’ version of eclampsia. It’s so rare and so toxic that I make the medical history books. (what I’ll do to get in a book)
I was checked immediate into the hospital and hooked up to every machine within a five mile radius; every ob-gyn in the country is looking in, out, and around me trying to get a glimpse of, “the worst case of eclampsia,” according to my specialist - flown in from some foreign country to deal with this “once in a lifetime” event.
I should have charged admission because it really got out of hand when the media arrived. I kid you not - who could make this up. (only a really crazy writer with the wildest of imaginations)
In comes this very cute, very young doctor and with a serious tone, he takes my hand and says, “You’re baby is doing just fine, all the monitors indicate your baby is stable"...big long pause, and a heavy sigh..."It’s you we're concerned about. You see, we can’t seem to stabilize you. Now, about delivery, were you planning on natural childbirth…?”
He hesitates just long enough for me to ‘toy’ with him about this very sensitive subject. You see, the eighties were full of ‘natural childbirth junkies’ and I figured he was trying to size me up and see if this was going to be an issue.
I smiled, and ask, “Is natural childbirth still an option?” (I wasn’t going to tell him that I had signed up for the ‘express’ c-section birth and wanted a neat and tiny incision right above my womanly bits. (which a fellow esthetician had appropriately waxed two weeks before, an inch lower then usual - my scar is nicely buried deep in bush country)
Finally I’m prepped for surgery and off I go fully prepared to be a ‘mother’ within the next thirty minutes. Many hours later, after being prepped three times for surgery I’m sliding down that slippery slope of despair and I tell the doc I’m starting to lose it.
My condition was so bad that after the final prepping the entourage of doctors I now had are circling the wagon and talking in hushed voices; every now and then looking at me and shaking their heads.

I then heard from the huddle a voice - “Cross your fingers boys, we’re going in," and with that I was in the operating room.
After a little poking and probing I’m hooked up to the juice. I'm not feeling my toes, or much else and as the docs are making their first incision bells and whistles on my blood pressure machine start going off. I’m having a major meltdown - no heartbeat, no pulse - not looking so good. (and we wonder why I only have one child) Chaos!

Sometime later...Miss CP was born. Cute as a button and oh, so little. She was three weeks early and weighed 5 lb. 2 oz.
I got my Aries and I lived through my neonatal nightmare just so I could be her Mom.
Anything exciting happen to you on route to parenthood?


Editor's note - I did a few post-publishing typo corrections this morning...I must stop all this late night writing - too hard to proof!

Email ThisBlogThis!Share to TwitterShare to FacebookShare to Pinterest
Posted by Pearson Report at 1:54 am