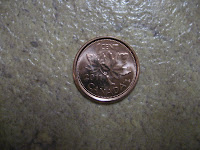 She reached out to take the few coins offered back in change; they fell to the floor; she had not been fast enough.
The young man behind her smiled and waited for just a moment before bending and claiming the coins.
Surrendering them to her - their hands touched. He was taken by the warmth and smoothness of her skin.

He smiled.
She thanked him and asked him to keep the sole penny, in the grouping, as a wee token of good luck; she had a knack for finding lucky pennies and at every opportunity thrilled in sharing one.
To the left of the store was a favourite coffee shop of many of the locals; she had often enjoyed people watching from the corner nook and the thought of a little pause, before walking the three blocks to her home, was appealing; as was the thought of a good coffee.
Home had its burdens, not that anyone every heard her complain, but having a few moments to herself was as good as getting on a plane and having a few days in the sun...well, almost!
His voice startled her...how long had she been standing, blocking the doorway...he asked if she would join him for a coffee - holding the door she walked in ahead of him.
At no loss for words or good cheer they struck up a healthy conversation and before she knew it she was saying good-bye.
He reached for her hands, squeezed them gently and said, “same time next Tuesday?”
She winked and said, “I’ve never regretted the investment of a penny - next week would be lovely.”

Have you ever been given a good luck penny? And...
Jenny

Email ThisBlogThis!Share to TwitterShare to FacebookShare to Pinterest
Posted by Pearson Report at 8:21 pm