Thank you to everyone who submitted a name suggestion for my writing room.

On Thursday, at the end of my day, I played with all the words, from the names I was given; I looked them up in my Thesaurus; I tossed them in the air and stirred them around in my head. Then I planted them in my subconscious and from that seed blossomed the tree from which I picked the name.
As I mentioned, in an earlier post, I don't play music when I write...usually.
But as I sat on my chair, comfortably tilted back, my ipod plugged into my cranium audio ports playing tunes from my FAV Playlist, I closed my eyes and watched as words danced in my mind’s eye amongst the backdrop of music.
I know for certain my taste in music is not as diverse as some, nor as particular as others, but I do know what I like and for me a little rock goes a long way in clearing the clutter in my head.
It was late - I was exhausted and tired but when Midnight at the Lost and Found started to play  - I smiled.
I knew what the name of my room would be.
I realized that for the first time, in this particular lifetime, I had found myself; my lost soul was letting me know that right here was where I should be.
Right here - in the Lost and Found - a room where a long journey has come to an end and a new journey is about to begin.
The name of my writing room was inspired by You and Meatloaf from my Hits out of Hell collection.

Note: I tried to embed a link to the song through YouTube - but it is copyright protected and although I tried several of them, none would work. (it only let me know that is was © protected after I posted it which was doubly annoying)

But...that won't stop me from giving you the actual link to YouTube, where you CAN listen to it if you are so inclined! 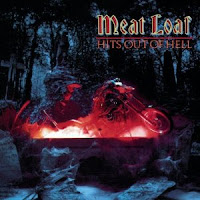 This is the cover photo of my CD

Also, here are the lyrics - I like knowing what I'm listening to and maybe you do too!

My writing room is officially named
"The Lost and Found"
Now...go out and find what you lost!

Thank you for following, for commenting, for being out there and in here.
Jenny

Email ThisBlogThis!Share to TwitterShare to FacebookShare to Pinterest
Posted by Pearson Report at 9:34 pm