The story of the package...clarity, background, plot revealed.

You asked for a little more “clarity” on the plot of my last post - the story of the package.

Well...here you have it.

Back on October 28th I received an email from Matthew; a dear blogging friend who has been incredibly encouraging and supportive of the many adventures I share here on Pearson Report.

In his email he said he had a “massive ask” of me and wanted to know if I would draw a portrait, “something cute”, maybe a caricature, of his dear friend who was going through a very difficult time. He wanted to put a big smile on her face for her upcoming birthday.

Reading his email I was deeply touched, and as I said in my last post, it brought tears to my eyes. The young woman’s story is not mine to tell, suffice it to say my heart was profoundly moved and without hesitation I accepted Matthew’s request.

My daughter is a designer at a major animation studio and when I called to ask if she would like to draw a caricature (cartoon version of the young woman) for Matthew she was delighted to be part of such a meaningful gesture.

Matthew sent me a few photos, and Courtney was told the young woman loved the characters from the Batman franchise to which Miss CP (as I affectionately call my daughter) decided on Bat Girl for the character she would draw.

Our drawing sessions became wonderful bonding moments where tears and laughter were shared, and the love of a common passion strengthened.

We both came to understand that this project was bigger than what we were drawing and creating - it was about reaching out and helping others. (There really isn’t a better feeling.)

For Courtney, who draws for a living, this task, while still requiring time and patience, came second nature to her and watching her “do her thing” was truly magical.

Here are a few shots of Miss CP at her Cintiq...working on Bat Girl. 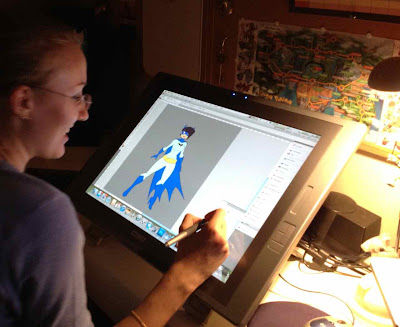 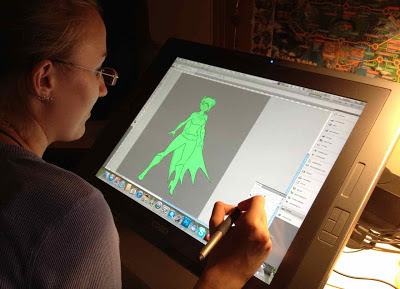 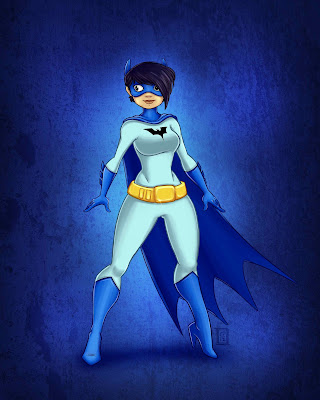 Me...on the other hand, well, I had my share of difficulties.

To start, I have no formal portrait drawing skills under my belt and had only attempted one other portrait as practice for my Creative Drawing classes. It would be safe to say I felt like a fish out of water.

Add to that the four day period where I was overcome with fear and doubt about drawing hair. It was very difficult. Very. I managed to lay the base lines down, but how to fill in and darken them was much harder than I first imagined.

There is a process to drawing hair which I did learn, albeit a little too close to the end. I was able to incorporate what I had learned and I am proud of my effort with the hair I drew, even if I could have had more knowledge and skills to help me.

With that, here are a few photos showing my progress through various stages. 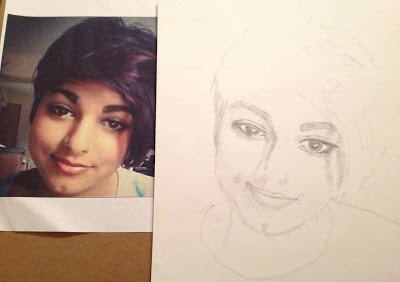 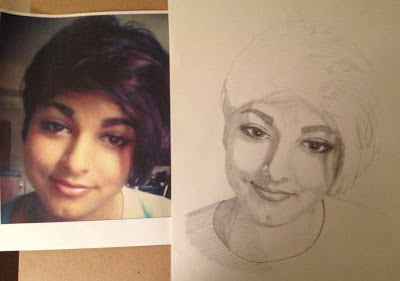 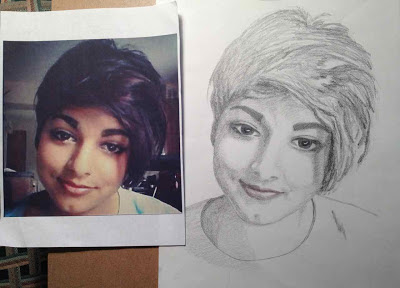 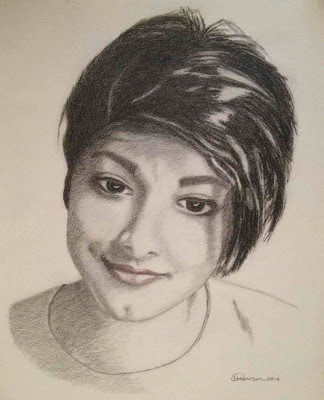 Last was the shipping, a part that I had little experience with. It took some sleuthing to find out I needed to “finish” my pencil drawing with a fixative and then ship it flat, not rolled as one might do with painted canvas. Ah...the learning curve was steep!

When the package arrived, dear Matthew was so excited he wasn’t sure if he should open it or wait until November 23, the birthday of his sweet friend. I assured him he would figure it out.

A short while later, that same day, I received an email letting me know he did open it and had looked at the art...he was WOWED and his email totally rocked my world...Miss CP was equally tickled - we all could hardly wait until that Friday.

The birthday arrived and dear Matthew gave his gift...a gift he had been hesitant to ask for help in creating...and here it was for his special friend.

When his next email came it was beyond words...I cannot begin to even do his words justice...they were so happy, so full of joy and gratitude - you could almost hear the spring in his step. Tears of happiness filled my eyes.

To help Matthew bring such joy to his friend, as she goes through this very difficult time, was the ultimate in happiness - this experience will be forever etched in my heart.


Dear Matthew - thank you for letting me be part of your gift.

Well...there you have it...the story of the package...unwrapped!

Since Matthew had given this story some exposure over at his place (which you really must visit, if you haven't already) it allowed for me to give you more of a first person perspective with a few more details.

Is the story clearer now? Any questions? There is going to be a quiz, you know!

Miss CP took 5 hours from start to finish to complete her digital art piece. This included her moleskine sketch, the rest done in Photoshop CS5.

I took 15 hours from start to finish, of which 4 hours was spent on the hair alone. Most of the drawing was done with a 4B pencil. I used 6/8/9B for the hair. Plus I made a mess of two kneading erasers!
A hint of red colour was used on the lips.

Then...there was about 168 hours (7 days) spent stressing while waiting for the package to be delivered. Only then...could I breath in deeply and really feel the warmth of this adventure wash over me.

Cheers, Jenny
Email ThisBlogThis!Share to TwitterShare to FacebookShare to Pinterest
Posted by Pearson Report at 2:40 am